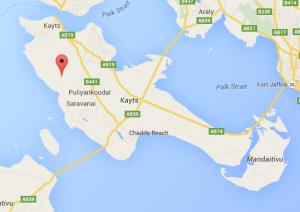 Velanai island, connected by a causeway to Jaffna is sometimes referred to as Leiden, its Dutch name, or Kayts, after the village on its northeast coast. A beautiful but sparsely populated place, it has a deserted feel thanks to the war, and many structures remain in ruins.

If you approach Velanai from Jaffna, you’ll pass a turnoff for the half-built Sabins Blue Ocean Resort, which has a slightly forgotten air (don’t expect much in the way of service) and a few basic rooms, but a lovely beachside location.
A few clicks further on, Chaatty Beach is no white-sand wonder, but it’s passable for swimming and has changing rooms, picnic gazebos and snack vendors. It’s just 11km from Jaffna. 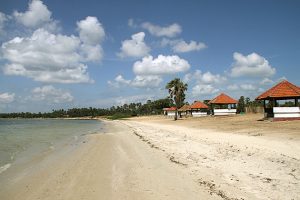 If you approach Velanai from Karainagar, the ferry will drop you at the eerie, tumbleweed settlement of Kayts between a dozen scuttled fishing boats. This lonely place had far more bustle in centuries past as this was the port from where elephants were shipped to India. Kayts today is tiny but has some noteworthy colonial buildings, including three churches near the jetty. Walk straight up Sunuvil Rd and take your first right to get to the Portuguese St James’; if you turn left instead you’ll hit St Joseph’s; and if you continue up Sunuvil Rd, you’ll see St Mary’s on the left. Just beyond St Mary’s, the first asphalt lane to the right leads 600m to a placid waterfront cemetery with views of offshore Fort Hammenhiel (now a luxury hotel). At the island’s northwest is Karampan, where Navy-operated ferries depart for Analaitivu and Eluvaitivu. 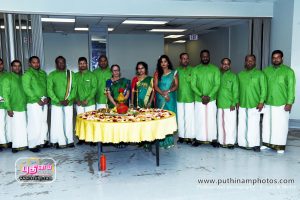